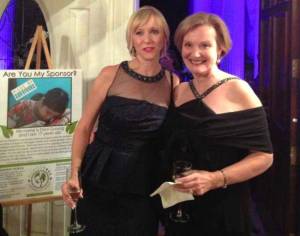 Beth Tiger and Elizabeth Geitz have teamed up to raise money for a Good Shepard Academy School in Camaroon, West Africa, which will progide housing and education for foster children.

Over lunch about six months ago, Elizabeth Tiger heard a story about Ambe, an orphan from Bamenda, Cameroon, who at the age of 13 was kidnapped by human traffickers while on a 10-mile walk from home to school.

Tiger, co-founder of the borough-based Durga Tree International, reached out to the six other members of the nonprofit, which raises funds for “on the ground” charities throughout the world to eradicate human trafficking. The team eventually organized Walk With Ambe, a 5-mile walk-a-thon, which will be held from 10 a.m. to noon, Saturday, May 17, at the Saddle River County Park Wild Duck Pond, 1113 E. Ridgewood Ave., Ridgewood.

The goal is to raise $75,000 for the creation of Good Shepherd Academy in Bafut, Cameroon. The academy will provide housing for and educate 720 orphaned children. About $21,296 had been raised by Friday, April 11.

“The day of the walk, we’ll all be walking with Ambe to school. We’ll keep him in our hearts and minds, as well as the hundreds of other children who fight that same battle,” Tiger, of Upper Saddle River, said in an interview at her Center for Inspired Living, a wellness center at 100 W. Main St. “These kids are faced with the possibility of being kidnapped for human trafficking whenever they walk to school.”

Some of the children she refers to are orphans who live at the Good Shepherd Home for Children in Bamenda.

“Ambe lived to tell his story, but not all the children get that chance,” said Tiger, who works as a life coach, inspirational speaker and has authored the book, “From the Ashes to Divorce,” a Balboa Press publication.

Ambe’s story has crossed the North Atlantic Ocean to Ramsey from the mouth of Elizabeth Geitz, board director for the Good Shepherd Sustainable Learning Foundation. Geitz eventually penned the nonfiction, “I Am That Child: Changing Hearts and Changing the World,” a Morehouse Publishing release, which talks about her trip to the home in Bamenda and the children she met.

That chat between the two philanthropists led to the partnership between Durga Tree International and Good Shepherd Sustainable Learning Foundation, which was created to promote access to education in Cameroon in West Africa, south of Nigeria.

“Human trafficking comes in various forms. Our mission is to eradicate it around the world by teaming up with charities who are ‘on the ground’ saving the lives of people who have been bought — slaves,” Tiger said. “Some people may think they don’t contribute to the process because they’re not out promoting or purchasing a prostitute. But we have to become more aware about where our clothes and shoes are coming from. Ask questions. Were my shoes made by the hands of a child who was kidnapped?”

It was by asking such questions that led to the founding of Durga Tree International one year ago.

Tiger met Sarah Symons, founder of Made By Survivors, a charity that employs and educates women who survived or escaped human trafficking in metalsmithing and jewelry design. Symons asked Tiger if she could sell the jewelry of Made By Survivors at her wellness center.

“I began asking what more can I do besides selling products in Ramsey?” Tiger said.

She said she and husband Tim, co-founder, thought their nonprofit could do the job of fundraising for the many charities around the world, helping survivors of human trafficking.

The first fundraiser was held in November — a masquerade ball that raised $40,000 for Made By Survivors.

A third fundraiser is being planned for the fall, which will involve a “lock in,” demonstrating to donors how victims of human trafficking often get locked into confined spaces for long periods of time. More details will be available by summer.

For more information about Durga Tree International or its affiliated charities, visit durgatreeinternational.org. To sign up for Walk-With-Ambe, visit wizathon.com/Walk-With-Ambe.