The Spirit of Hollybush Award Recipient 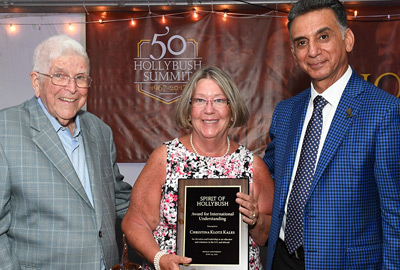 Fifty years ago this month, the Rowan community (then Glassboro State College), along with the Borough of Glassboro, hosted the Hollybush Summit, a two-day meeting between President Lyndon B. Johnson, Soviet Premier Alexei Kosygin and their top advisors.

Assembling in what was then the college president’s home, the leaders addressed some of the most pressing issues of the day including the escalating U.S.-Soviet arms race, Middle East peace, the Cold War and the conflict in Vietnam.

Though the summit did not produce a landmark treaty per se, President Johnson afterward described the willingness to work together, even in difficult times and with one’s adversaries, as the “spirit of Hollybush.”

On June 24, Rowan’s 50th anniversary celebration of the 1967 Hollybush Summit included day-long activities capped with an evening dinner and an inaugural awards program recognizing four individuals and a business whose contributions to our community reflect the “spirit of Hollybush.”

One of the inaugural awards recipients was a very own…

Patricia Paulsen ’84, M’95, of Glassboro, a recently retired 30-year teacher and administrator in the Glassboro School District, was presented with the Spirit of Hollybush Award for Education. Paulsen was honored for her many years of contributions, including work with generations of Glassboro elementary school students and members of their community.

Nexus Properties of Glassboro, which has joined with Rowan and the Borough of Glassboro in the $400 million Rowan Boulevard redevelopment project, was recognized with the Spirit of Hollybush Award for Partnership. Set to open the latest phase of the Rowan Boulevard project later this summer, Nexus has helped bring housing, retail, office, recreational space and more to the downtown. Nexus COO Dante Germano, a Glassboro native, accepted the award.

Fred Tartaglione, Jr. of Glassboro, owner of Tag’s Auto Supply in Glassboro, who was bestowed with the Spirit of Hollybush Award for Business. Tartaglione, who has based his business in downtown Glassboro for nearly 40 years, was honored for supporting community initiatives large and small and exemplifying the values of a true hometown business.

Jim Wigglesworth of Glassboro, a nearly 50-year volunteer with the Glassboro Fire Department, a U.S. Army veteran and a youth football coach in Mullica Hill and Glassboro, received the Spirit of Hollybush Award for Public Service.