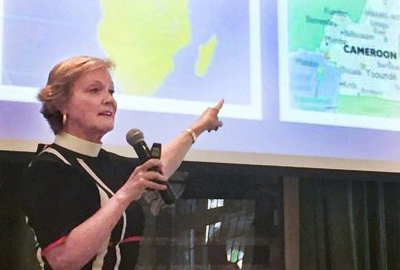 Children in Cameroon are lucky if they get an education at all, let alone one that extends beyond the fifth grade.

For those fortunate enough to enroll in school, many end up walking more than 10 miles along dangerous routes to get there. Overcrowded classrooms with inadequate resources await them.

Those are some of the statistics that the Rev. Canon Elizabeth Geitz shared with parishioners of The Episcopal Church of Bethesda-by-the-Sea during a talk she gave Sunday about a school she is helping to build in the West African country.

Upon completion, the Good Shepherd Academy will serve 350 students on a campus that will include 12 classrooms, three science labs, several sustainable vegetable and animal farms, as well as dormitories.

Geitz, chairwoman and co-founder of Imagining Tomorrow, a project of the nonprofit organization behind the school, is a part-time Palm Beacher who also resides in Pennsylvania. The journey that led her to the project started in 2000, when she met Anglican nun Sister Jane Mankaa.

“My life has never been the same,” Geitz recalled.

Mankaa, a Cameroonian who grew up in the wake of the AIDS epidemic, recognized the need for the hundreds of thousands of children orphaned by the virus and devoted her life to the children of Cameroon. She since started two orphanages and a home for special-needs children.

“She is an entrepreneur,” Geitz said. “She’s not looking for American churches to support her. She also supports herself.”

To help pay for the facilities she operates, Geitz said Mankaa runs a chicken farm and a bakery that sells bread and feeds the children. But Geitz and Mankaa wanted to do more to end the cycle of poverty in Cameroon.

That’s when they partnered with Good Shepherd Sustainable Learning Foundation USA and Good Shepherd Academy Association in Cameroon to create a plan for the school.

The project’s first phase — which includes an administration building, a guard house and part of a student dormitory — has been completed and 22 students are currently enrolled, according to Geitz. She said the entire project will cost $2.5 million.

She said Sunday was the first time members of Bethesda were introduced to the project. Geitz wasn’t sure if parishioners would contribute to the project.

“It would be wonderful if they were,” Geitz said after her lecture. “I think it resonates with people, you know?”