They stood in a circle around an altar of stones, built moments before on the newly bulldozed ground – three nuns and an infant, a minister, and a Good Shepherd Home teen. Barefoot, they stood on the rich brown clay of God’s earth, knowing they were on holy ground — for this was a holy day, a day of celebrating, a day that had been a long time coming. 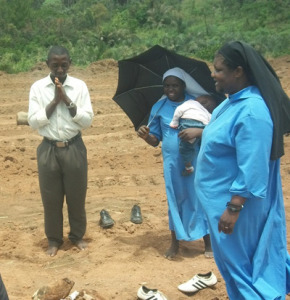 With proceeds from their chicken farm, the Cameroonian Team had purchased twelve acres of prime land on Ring Road in Bafut, Cameroon to build their dream – a residential secondary school compound for 400 students. The student body would be composed of AIDS orphans granted free tuition, and paying students eager to obtain an education that could transform their lives forever.

“This task will not be an easy one,” the minister said. “Be still, pray with me and believe it will happen.” Then he paused, shook his head and slowly continued, “At this very moment, one of your Good Shepherd children is surrounded by evil. Pray for that child. Pray right now that no harm will come to that child.” So together they fervently prayed for the unnamed child, the school yet to be, and the future of the children they loved.

Soon after, the nuns and children hurried home, eager to see if everyone was safe. At the Good Shepherd Home compound in Bamenda, all seemed to be in order. Babies had been bathed; preschoolers were singing songs and learning; security dogs were keeping watch.

Then it happened. One of the thirteen-year-old boys did not come home from his ten-mile walk to and from school. They began to inquire and learned that Ambe, one of the first children to arrive at the home in 2003, had never made it to school. Their hearts sank for they knew what this could mean. Too often Cameroonian children leave home and are never seen again, abducted by human traffickers who force them into a life of domestic servitude or prostitution, or kill them for body parts used in witchcraft rituals.

After searching in vain, feeling frantic and shaken to the core, suddenly they received a late night call from the Bamenda police station. Ambe was there. Ambe was safe! They found him completely exhausted, shaken, and scared. With thankful hearts, they brought him home and waited until he was ready to tell his story.

Gradually, slowly he began telling his story to Sister Jane Mankaa, founder of the Home and mother to 150 children, “Mama, I saw this man I knew. He had brought food here to the Home for us. ‘Hi Uncle’ I said, remembering his big smile. ‘Would you like a ride to school?’ he asked me. But Mama, I said, ‘No’, like you taught us. The next thing I knew another man got out of the car and threw me in the back seat. He was very rough with me. They took me a long, long way out into the bush and locked me in the room of an abandoned house. There were lots of locks on the door.

Mama, I dropped to my knees and prayed like you taught me. I knew if I didn’t get out of there I would never see you and Mama Lizzie and my brothers and sisters again. Then I saw this stream of light coming through a window high up. There was nothing in that room except for one chair, so I stood on it and looked out and there was this young boy. ‘What are you doing in there?’ he asked me. ‘I’ve been kidnapped! Get me out!’ I told him, but not too loud.

Even though the kidnappers were still in the house somehow he got me out and I ran for my life! My flip flops fell off and I had to run barefoot; my feet were blistered and bloody, but I did not stop. I knew I was about to be killed for witchcraft.”

As his story ended the children, wide-eyed, all hugged and comforted him. The Sisters and children then gave thanks for his miraculous return. Once he recovered, Ambe was given a chicken dinner and told he could eat all he wanted, a rare occurrence. In the weeks following, the Sisters took him to special “Thanksgiving Services” in neighboring communities and churches, where one Cameroonian after another raised their voice in prayer, song and jubilation for the return of their beloved child.

Ambe miraculously escaped from the traffickers, but many children are not so lucky. When Good Shepherd Academy is completed, Ambe and other vulnerable Cameroonian children will be protected from those who would traffic them for a variety of reasons. This residential secondary/high school compound for 400 students will give them the same chance my own children had – to attend school in a safe, loving, secure environment where they can thrive and study and play sports and live into their God-given potential.

To help raise funds for Good Shepherd Academy, you can Walk With Ambe on May 17th, or sponsor someone who is. You can even walk barefoot if you want!

THEIR DREAM. OUR MISSION. MAKE IT HAPPEN.