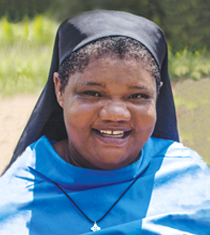 Sister Jane Mankaa grew up in Bafut, Cameroon the eldest of eight children. While her story is similar to other women growing up in poverty in sub-Saharan Africa, Sister Jane found a way to improve not only her own life but the lives of countless others. At 16 years of age, after graduating from secondary school, she declared to her father that she would join a religious order. He refused insisting that such a life would yield no children and no bride’s wealth. In defiance, Sister Jane left her family and joined the Sisters of Emmanuel, a Presbyterian order.

During her residence with the sisters, the AIDS epidemic began spiraling out of control and the effects of extreme poverty hit Cameroon hard. A generation of parents was lost and 300,000 children in her region were orphaned. Sister Jane decided to dedicate her life to helping them. When asked why, she said she was touched by an internal power that would ultimately allow her to leave the safety of her life in the convent, travel to America, and study convent management at Sisters of Christian Charity College in Mendham, NJ so she could found an order to care for the orphaned children.

Upon returning to Cameroon, Sister Jane founded Good Shepherd Home for Children, a Registered Orphanage in the Republic of Cameroon, which houses, clothes, feeds, and educates 150 children. For decades she dreamed of building a coed residential secondary/high school for all children of Cameroon. To accomplish her goal, she joined hands with the Rev. Canon Elizabeth Geitz to create a cross cultural partnership based on faith, mutuality, and transparency. They founded an American and a Cameroonian nonprofit which, together, built Good Shepherd Academy in Bafut, Cameroon.

“The Good Mother of Abangoh”, an award-winning documentary about Sister Jane has been shown at film festivals across the United States. I Am That Child, a book about her and the Good Shepherd children, was #1 on Amazon.com in 2014. She was the recipient of the Nation Builders International Achiever Award for Outstanding Achievement and Contribution to Nation Building in the Humanitarian Domain. Nation Builders International is an NGO founded in Ghana, West Africa.

Following Sister Jane Mankaa’s untimely death at the age of 60, her legacy and vision for the Academy are being carried forward by Good Shepherd Sustainable Learning Foundation, USA and Good Shepherd Academy Association, Cameroon.

Return to the Board of Directors