“We’ve found it,” Sister Jane Mankaa exclaimed to me jubilantly over the phone last year in March. “We’ve just returned from seeing the perfect piece of property for Good Shepherd Academy. It’s not out in the bush, but close to a main road on a beautiful mountain. You will love it!” 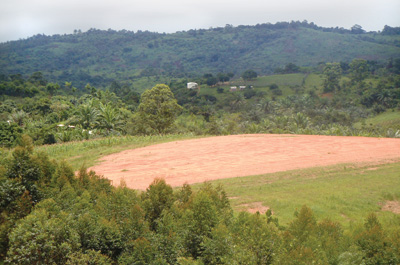 Curious as to what had occurred since our departure from Cameroon several months earlier, I asked her how it all happened. The piece of land she had her heart set on then was tied up in a land dispute with no resolution in sight.

“An old woman from my village of Bafut heard what I was looking for. She came up here to the orphanage and told me she had a piece of land for me to see. Just like that!” she said, snapping her fingers. “So I went with the Cameroonian Team and we fell in love with it. To get the twelve acres we need, we will have to negotiate with about four different property owners, but we will do it!”

And, negotiate they did until they owned it all. Well, at least they owned it in the Cameroonian sense of the word. In this West African country, regardless of money paid, a person does not actually “own” a piece of property until they break ground and begin construction on it. Since we had not raised the funds to begin building the academy, the land sat unused for several months.

Sister Jane called me one morning, clearly upset. “Canon,” she said, using my official title as a priest in the Episcopal Church, “the women want their land back. They say they are going to take me to court. They say I have taken away their livelihood and they have no way now to grow crops and feed their families. They are going hungry because of me. They are saying I am evil!”

I shook my head, trying to absorb what she was telling me. We talked over various options and decided to speak later. In the meantime, Sister Jane had given them money from the proceeds of her chicken farm to buy food, and she gave them food from her own farms as well.

However, we knew work had to begin soon to avoid similar problems in the future. A vacant piece of land in Cameroon is an invitation for someone to come farm it, or even plant a small concrete pillar in the ground and claim ownership of it, regardless of all the evidence to the contrary. 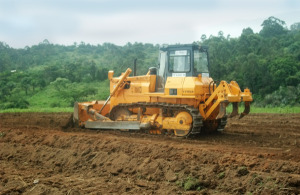 A surveyor was quickly hired and a bulldozer secured. To our surprise, there was only one appropriately sized functioning bulldozer in all of Bamenda, as others were too small for the job or would break down due to age and lack of maintenance.

After a great deal of searching and negotiating, the Cameroonian Team secured a bulldozer and a competent operator to run it, only to discover that they had to hire someone to sleep with it!

You see, in many developing countries, prize items like bulldozers are targets for thieves and leaving one unattended overnight can result in a ‘stripped’ dozer the next morning.

Finally, twelve acres of land had been purchased and surveyed and a bulldozer, an operator, and a separate ‘overnight bulldozer sitter’ were all in place. Our first hurdle had been overcome!

Or so we thought. Stop by next month for more, ‘Behind the Scenes’!